Nr. 1 Neptune
Location: Doelwater 5, 3011 AH Rotterdam
On the occasion of the official commissioning of the Town Hall on the Coolsingel in 1920, three sculptures were installed in the inner garden, one of which was this statue of Neptune, seated and holding a trident in his right hand. Neptune was the god of the sea in Roman mythology. This work and the statue of Mercury on the other side of the garden form an imposing pair; mythological figures have a certain grandeur that chimes with both the town hall and academic art. Both bronze statues were crafted by sculptor Bon Ingen Housz and they still feel very much at home in the town hall garden, which was renovated in 1997. They are positioned between geometrically laid-out hedges on either side of the third monument; a stone fountain with a group of children, sculpted in bronze by Simon Miedema. 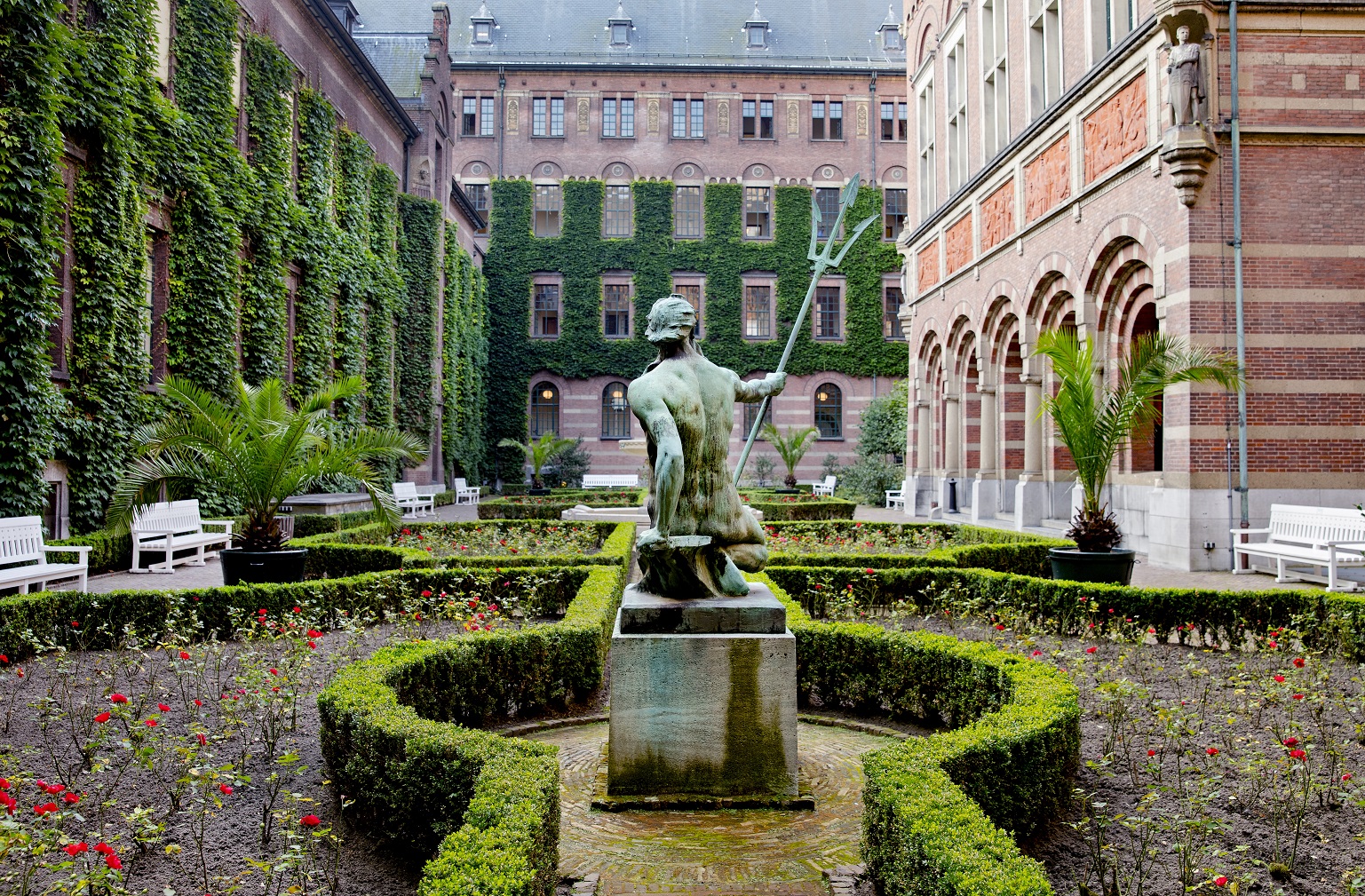 Nr. 2 Bospoldervos
Location: Schiedamseweg 280, 3025 AS Rotterdam
This colossal statue of a fox was installed at the Schiedamseweg in the Bospolder-Tussendijken quarter in May 2020. The Bospoldervos is 16 metres long and 10 metres high and weighs 65 tons. The design was by Florentijn Hofman, who has used this work of art to epitomise the relationship between city and nature. Nature contributes to the well-being of city-dwellers, and Hofman wanted to create an image that expressed the way in which the nature of peripheral urban areas finds its way into the city, advancing underneath the metro viaduct. Both foxes finding their way into the city and the ban on plastic bags were topical developments as Hofman embarked on his design. The Bospoldervos is a tribute to both nature and plastic bags. Did the fox pinch that bag? Is he trying to clean up the mess? Or perhaps he has been out shopping? Thanks to that unanswered question and the fox’s unexpected presence here on the street, the statue does not tell an unequivocal story. 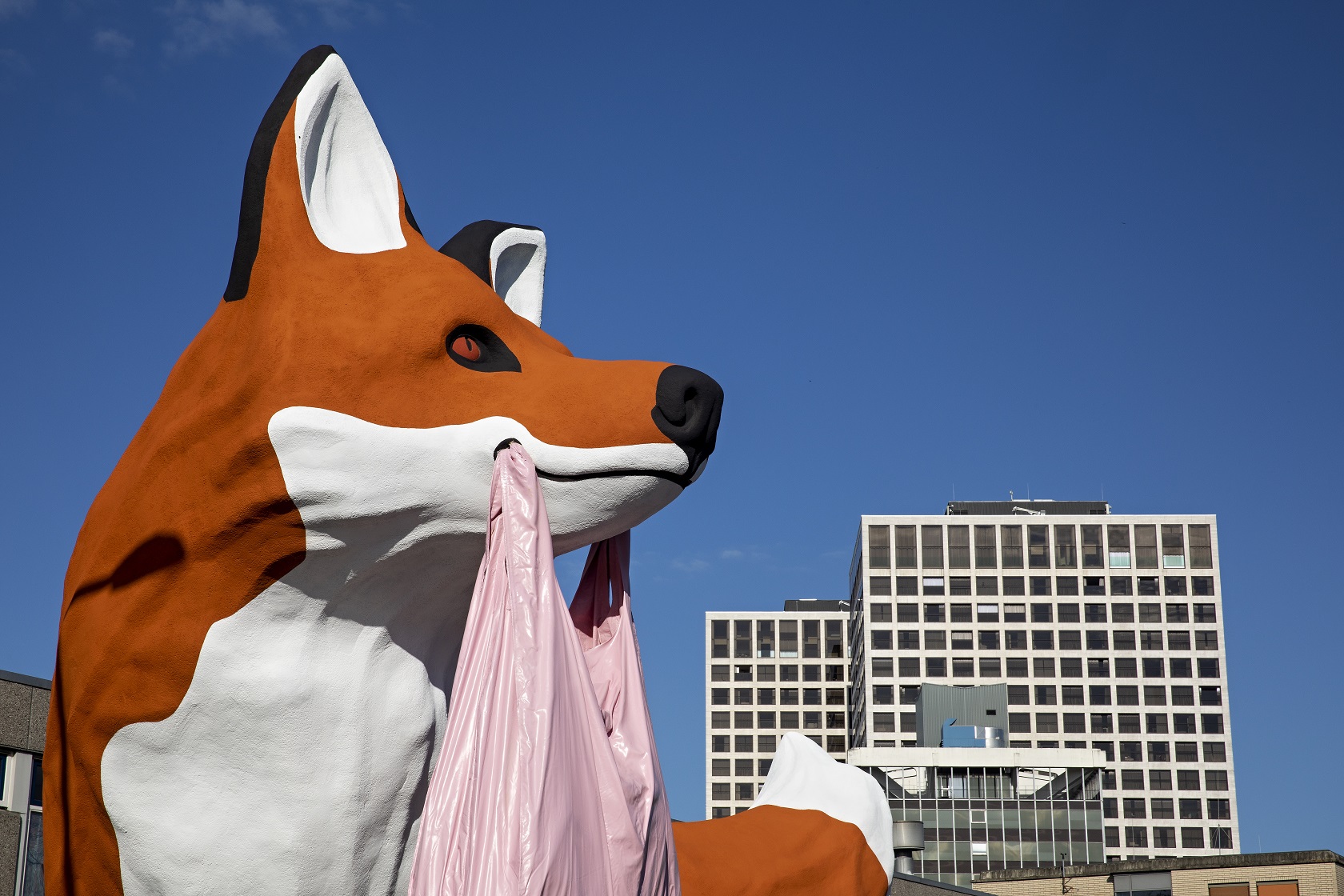 Nr. 3 L’Homme qui marche
Location: Westersingel 45-46, 3014 Rotterdam
L’Homme qui marche, or ‘The walking man’, is a prestigious work of art dating back to the first days of contemporary figurative art. Rodin was an artist who crafted highly realistic statues. His contemporaries even accused him of producing casts of living people rather than carving or modelling his statues. His L’Homme qui Marche is a slightly non-typical work because of the rather unrealistic nature of the walker. The statue’s head and arms are missing, so the emphasis is on the torso and legs, which suggest movement. The statue was too immature, sketchy and explicit for 19th-century tastes. In the 20th-century, however, it became an example for many modern artists. 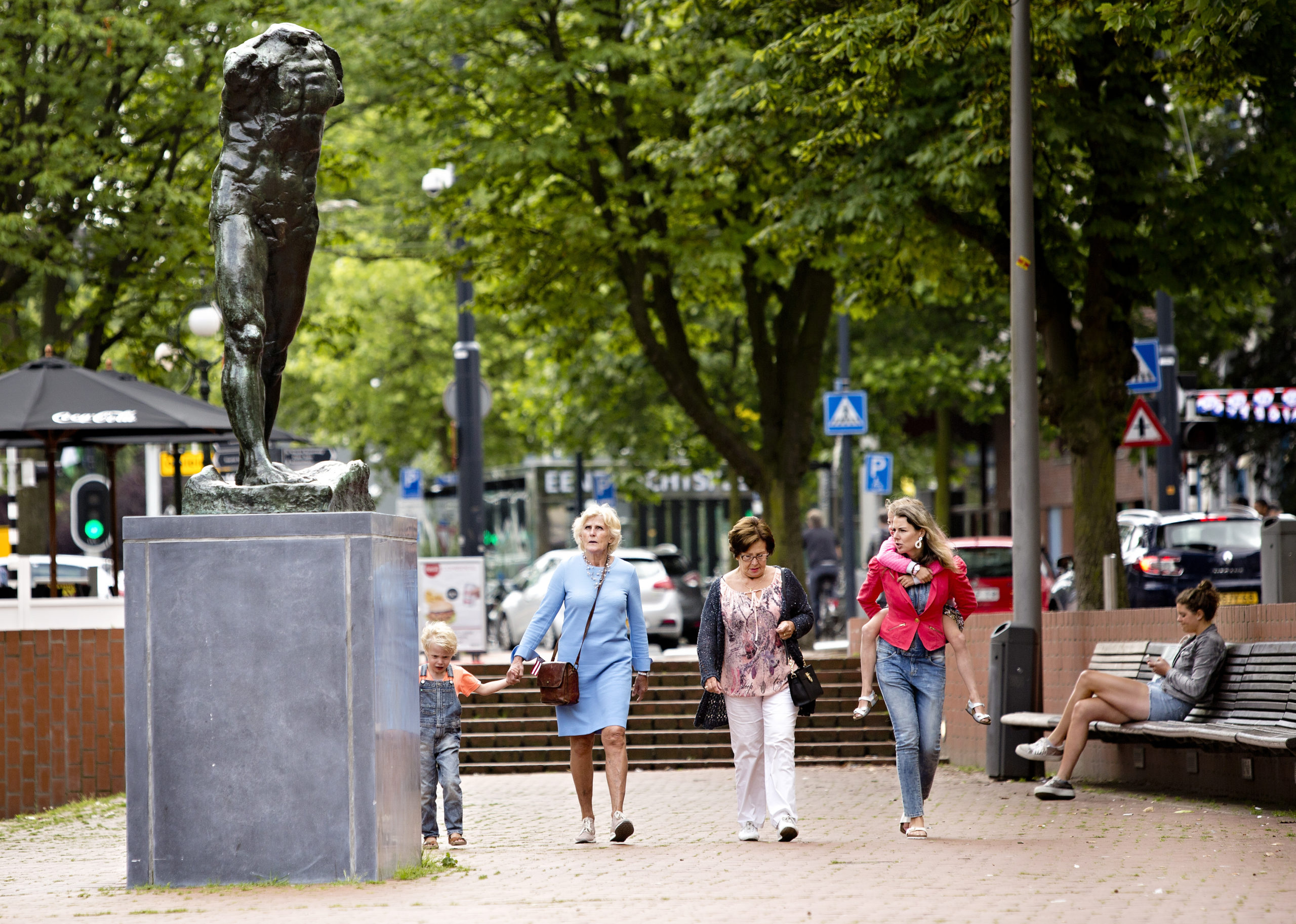 Nr. 4 The destroyed city
Location: Leuvehaven 1, 3011 EA Rotterdam
This statue, The destroyed city, is one of the world’s most famous war monuments, and has become the embodiment of the wartime bombing of Rotterdam. Zadkine crafted his war monument in 1947 in the form of a 70cm high statuette in terracotta. In 1949, the then director of the Bijenkorf department store, Mr Van der Wal, was so impressed by the design that he acquired a larger version in bronze, which he gifted to the municipality of Rotterdam. The hole in the body of this afflicted figure symbolises the way in which the bombardment by the Germans had hit the very heart of Rotterdam. The statue was installed at Plein 1940, a location selected by sculptor Ossip Zadkine himself. There, it stood surrounded by the ravaged city, with a commanding view of the damage caused by the bombardment. Zadkine also chose this location because of the view of the Leuvehaven behind the statue, connecting the port with the city and providing a backdrop of air and water. 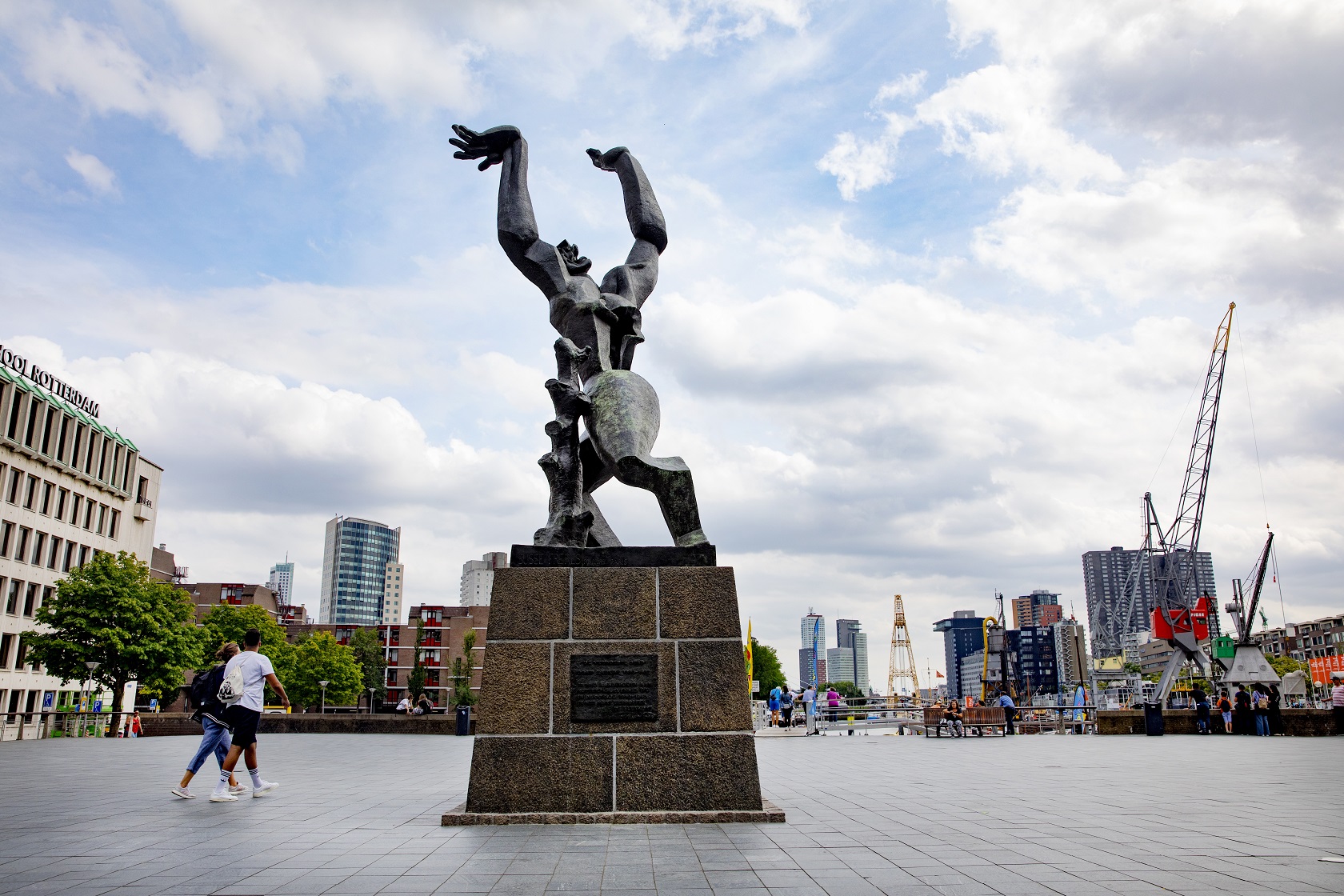 Nr. 5 Sylvette
Location: Westersingel 83, 3015 LC Rotterdam
This drawing in concrete is of 20-year old Sylvette, Picasso’s muse, whom he met in the spring of 1954. By then, Picasso was already 73 years old. He drew Sylvette with her head raised high, with slender neck and her hair arranged in a ponytail high on her head. Sylvette sat as a model for some 40 drawings, paintings and small-scale metal spatial installations. Picasso portrayed her in all of the many different styles he had used during his life as an artist, including cubism. In 1957, Picasso got to know the Norwegian artist Carl Nesjar, who had devised a new technique that made it possible to produce large concrete constructions. Small black stones were cast into the concrete, and the black colour was then made visible by sandblasting. In this way, drawings could be sandblasted into the concrete. Picasso was impressed, and using Nesjar’s technique he magnified his drawings into monumental installations. The Urban Embellishment Committee wanted to purchase such a concrete sculpture in 1963, but the population did not take kindly to the idea. In 1971, however, Rotterdam got its Picasso after all – the Bouwcentrum acquired the work of art presented it to the municipality in the context of C70; a post-war event to celebrate the re-building of Rotterdam. 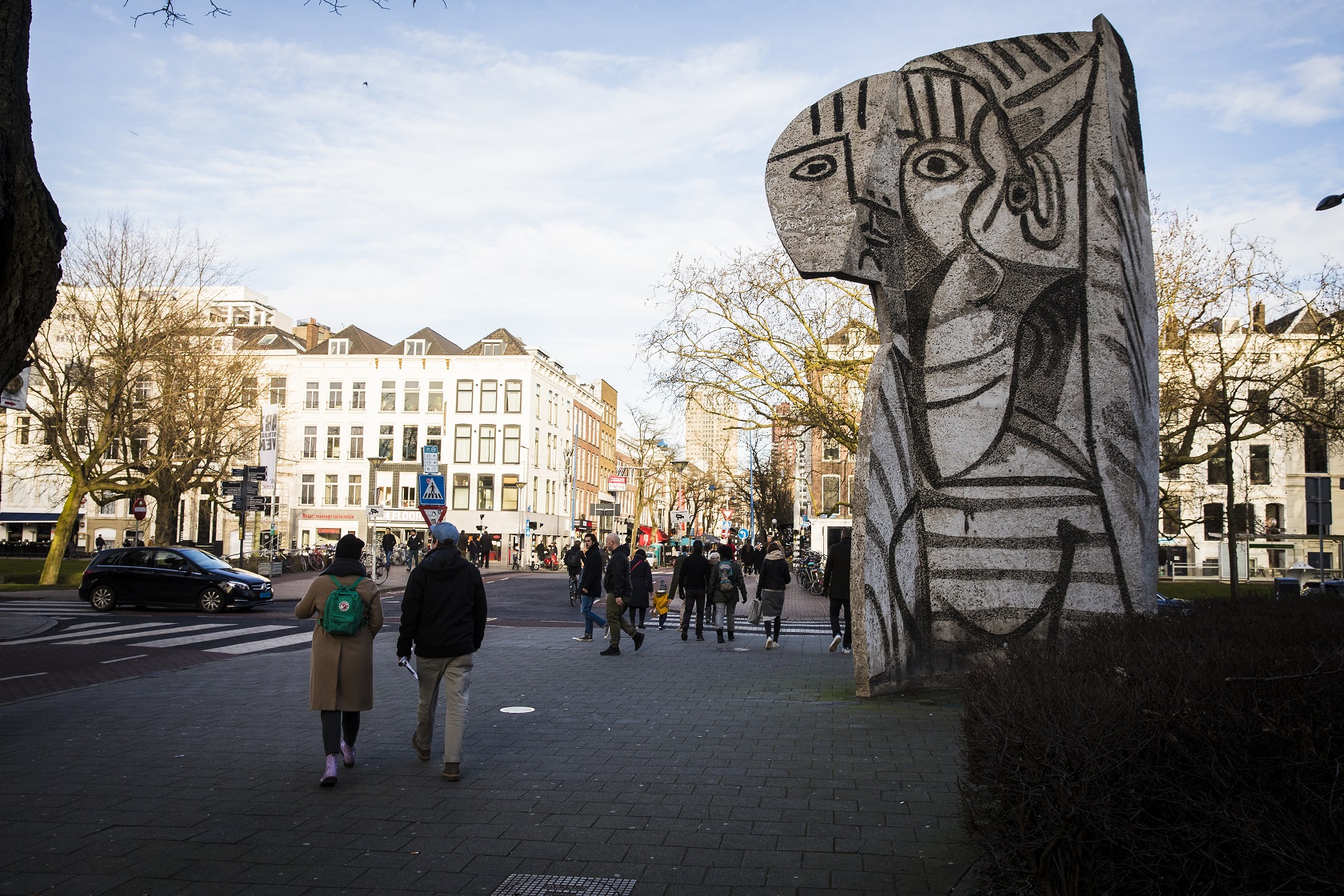 Nr. 6 Santa Claus
Location: Oude Binnenweg 142-150, 3012 Rotterdam
Nobody knows how to portray the hypocrisy of modern life quite like the artist Paul McCarthy, and his Santa Claus is another satirical comment on the affluent society. It is a critical standpoint characteristic of McCarthy’s body of work, combining ‘high’ and ‘low’ culture, as do many of his designs. The statue was supposed to be installed at the corner of the Kruiskade and Karel Doormanstraat, near the Doelen concert hall, but this caused quite a commotion when the statue’s purchase was approved by the City Council in February 2003. Two political parties – Leefbaar Rotterdam and ChristenUnie/SGP – wanted to abandon the project altogether, and the position of the statue, initially intended for a prominent position in the city centre, remained uncertain for a long time. The newspapers were flooded with articles and letters to the editor from people who were either in favour of or against the work of art, which had in the meantime become more commonly known as Kabouter Buttplug. Pending the selection of a final location, the statue found a place in the inner court of the Boijmans Van Beuningen Museum for some years. In November 2008, Santa Claus was finally installed in its permanent location on the Eendrachtsplein, where it has become a famous Rotterdam landmark, frequently featured on flyers and in photographs of the city. 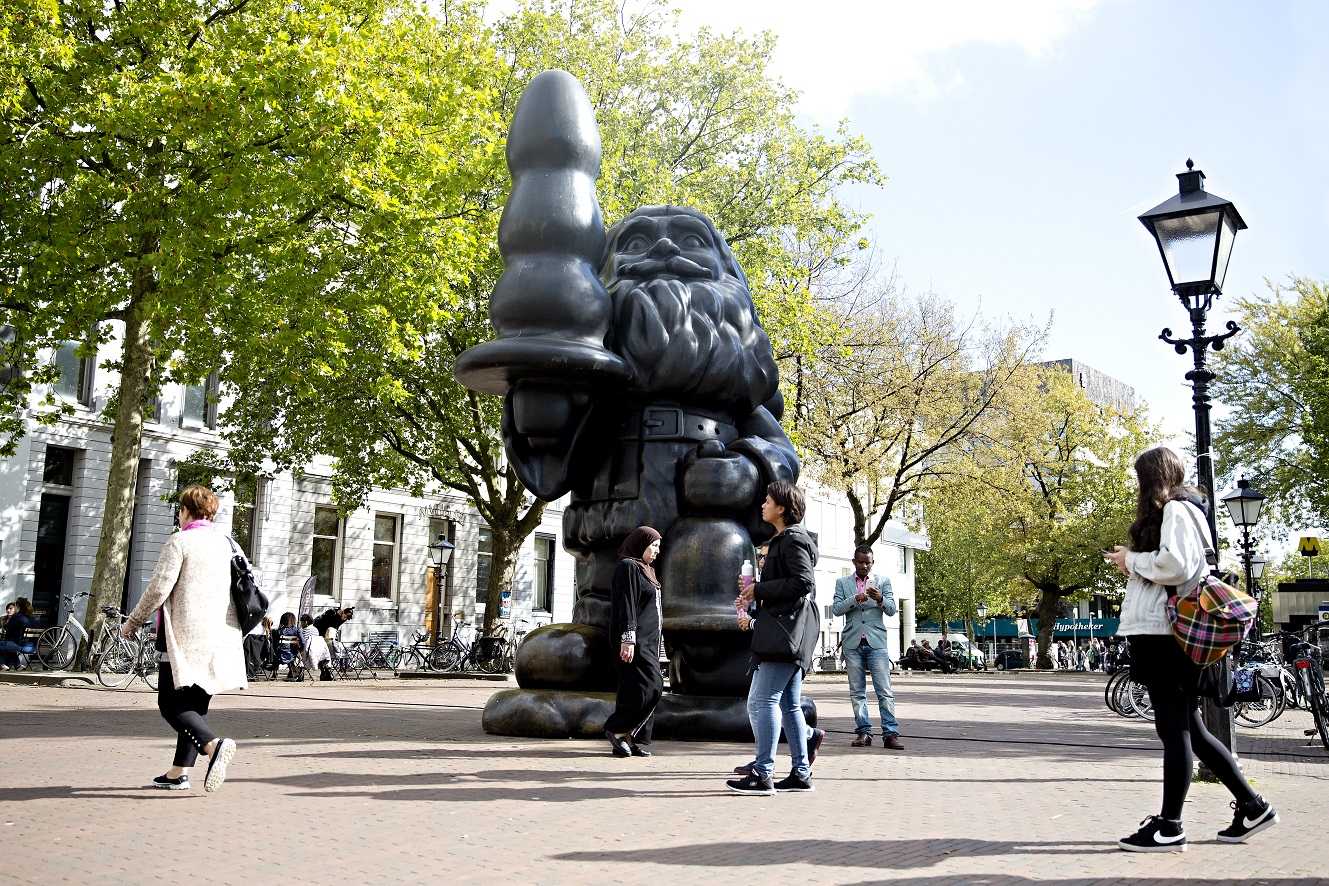 Nr. 7 Erasmus
Location: Grotekerkplein 5, 3011 GC Rotterdam
The Erasmus monument is the oldest statue in the Netherlands. Erasmus was one of the most important thinkers and trailblazers of the Renaissance in Northern Europe, and wrote the book ‘In Praise of Folly’ in1509. Erasmus was born in Rotterdam; indeed he called himself Erasmus Roterodamus – Erasmus of Rotterdam – and became a symbol of the city on the Meuse. Hendrick de Keyser made the design for this bronze statue of Erasmus, probably using painted portraits and drawings that had been created during the subject’s lifetime by Hans Holbein the Younger and others; the clothing, attitude and pose – reading with the hands placed on a hefty book – are consistent with that assumption. As a whole, these features convey an impression of the man as a humanist. The bronze statue is larger than life, and the two-metre high pedestal on which it sits elevates it high above the viewer. 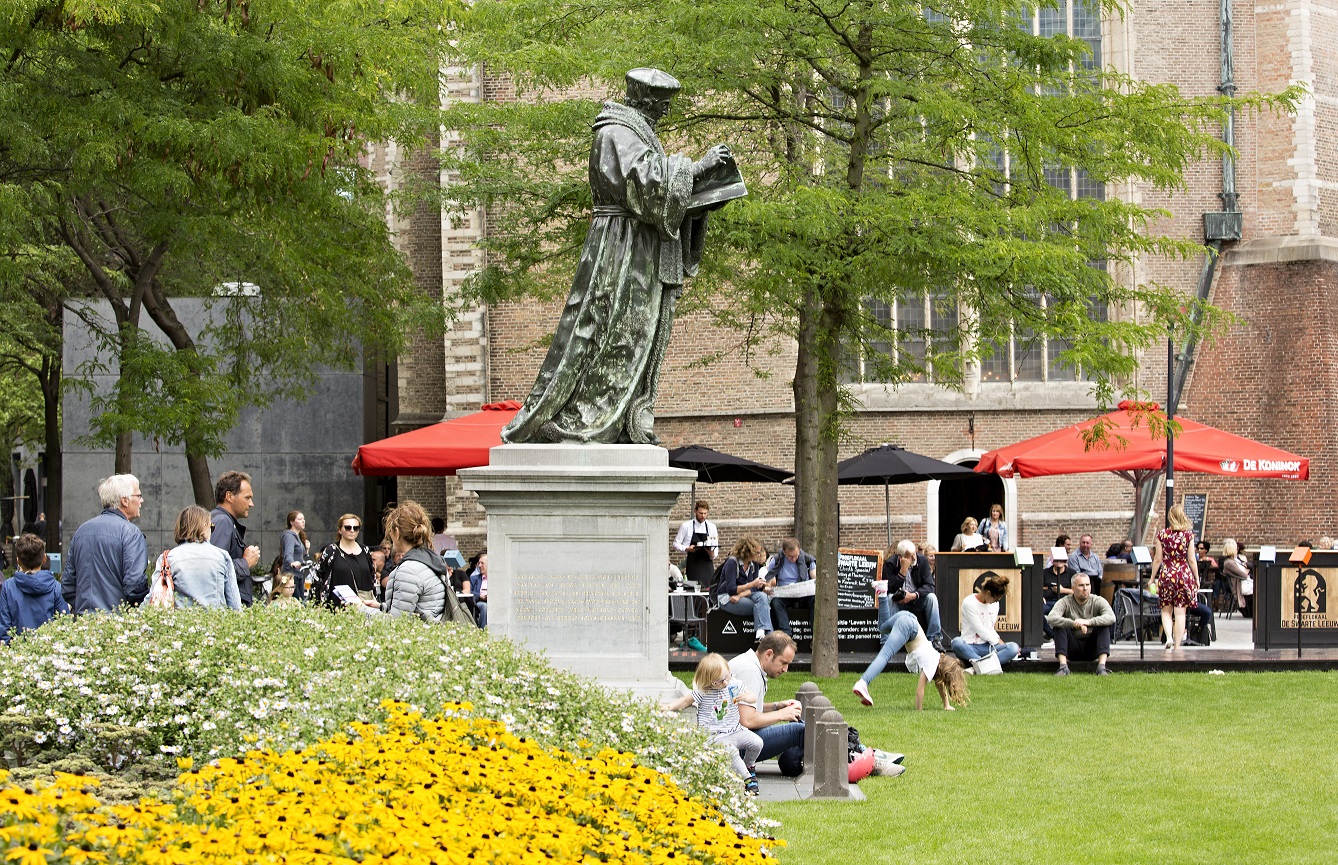 Nr. 8 Everyone is dead but us
Location Hoogstraat 126, 3011 PV Rotterdam
On Friday 18 September 2020, Everyone is dead but us, a work by figurative artist Ben Zegers, was unveiled. The two-part work is positioned at the crossroads of Binnenrotte and Hoogstraat. This is the original location of the ‘Dam in de Rotte’, the site where Rotterdam originated and from which it takes its name. The statue consists of two elegantly turned feet, positioned at a distance from one another. The feet refer to the origin of the city, but also to the ancient function of this site as a market place. The two statues stand as if in a dialogue, rather like a customer and a market trader. The work also symbolises the footsteps of the first residents of Rotterdam. The position of the feet is derived from a statue of ‘the little dancer’ by the artist Edgar Degas, which is in the collection of the Boijmans Van Beuningen Museum. 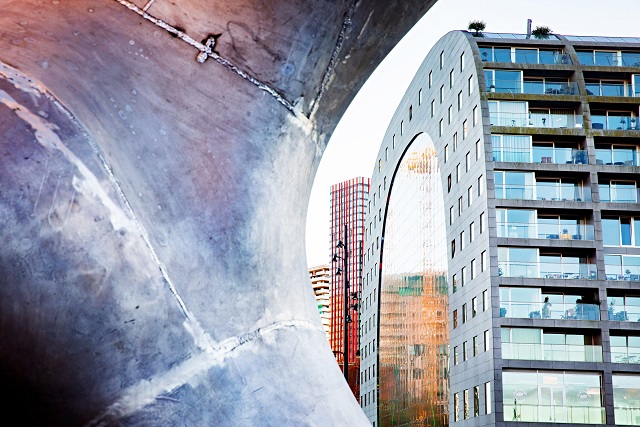 Nr. 9 Rabbits
Location: Westzeedijk 345, 3015 AA Rotterdam
These three Rabbits from the artist Tom Claassen were a gift from the Kunsthal to the municipality of Rotterdam on the occasion of the institute’s tenth anniversary in 2003. The rabbits are positioned on the grass in the Museum Park between the Natuurhistorisch Museum and the Kunsthal. They are quite popular with adults, but also with children, who like to climb on them. The three bronze rabbits – two standing and one lying down – are a cheerful and friendly complement to the park, part of their appeal being their bulky appearance and impressive dimensions. 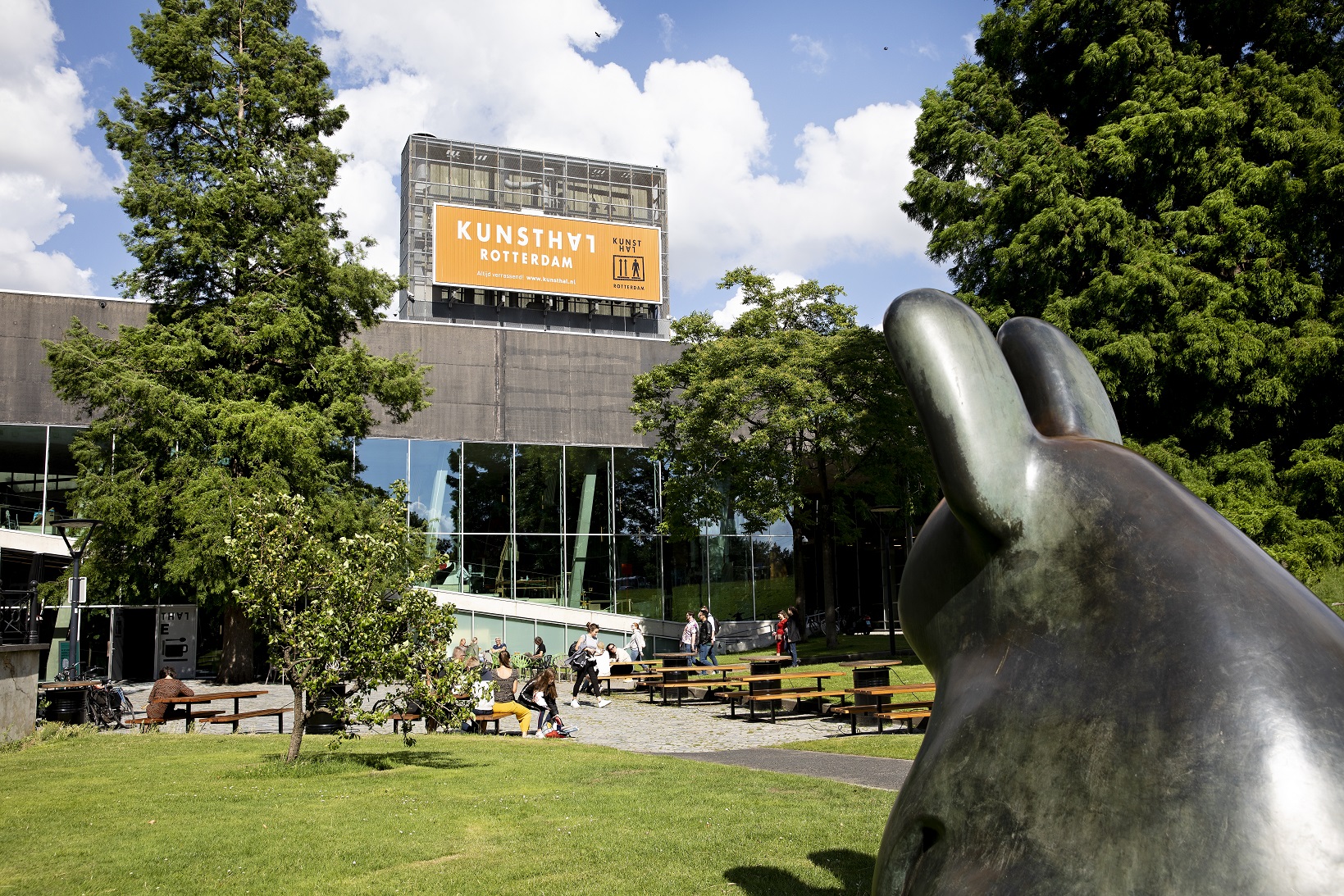 Nr. 10 Nieuwe Delftse Poort
Location: Galerij 15, 3011 AK Rotterdam
Mention can already be found of a Delftse Poort as far back as 1373, and in 1545 a new gate was built. When yet another Delftse Poort, designed by the architect Pieter de Swart, was built in 1768, it was the most famous construction in the city. That gate had to be moved in the late 1930s, following the upgraded lay-out of the Hofplein, and was finally destroyed during the wartime bombardment of 1940. Cor Kraat made a steel construction, open on all sides, to stand at the original location. The Nieuwe Delftse Poort looks rather like a three-dimensional drawing, with the neo-classical, pre-war gate constituting the basis for the design. The gate, which exudes the character of a work of art under construction, symbolises the fact that Rotterdam is still being built. The old gate featured four personifications: Trade and Traffic, the City Virgin, the Meuse and the Rotte. These figures are featured in stylised versions on the modern gate. Representing the old city gate, it stands as a reminder of 18th-century Rotterdam. 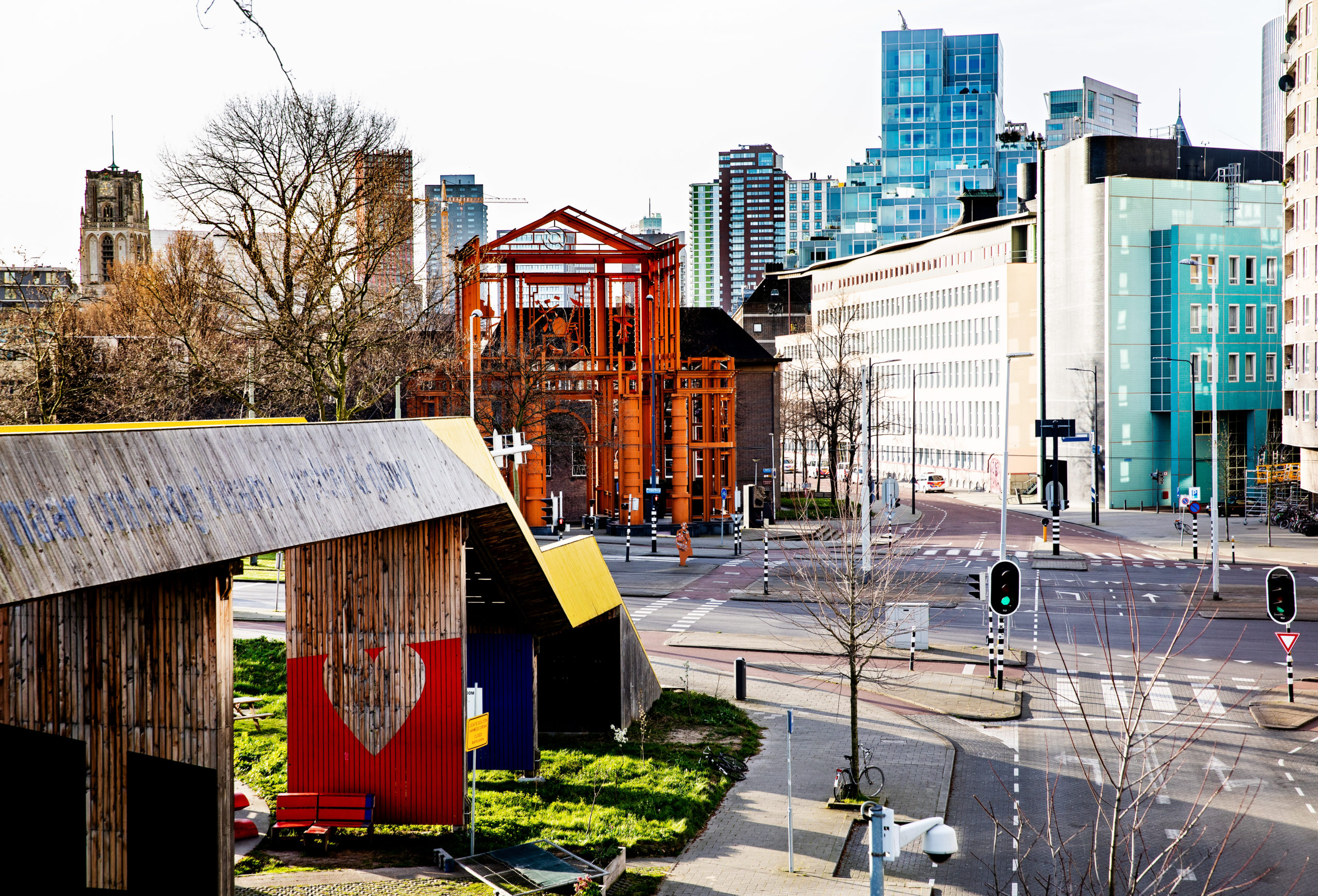