'It started with childhood heroes like Spiderman and Robin Hood'

Breathe. Walk. Die. These are the three words that artist Iwan Smit (32) has painted at the top right-hand corner of his 2017 artwork: The Mystical Birth of Rotterdam. ‘Breathe, walk, die − Jules Deelder himself might have written those very words. They remind me of the Rotterdam saying “actions speak louder than words” says Smit, as he stands in front of his more than 4m high and 3m wide painting in the Depot of the Boijmans Van Beuningen museum, which commissioned and bought this work of art.

His painting – an ode to the city of Rotterdam ­– is to be found on one of the many extendable walls in an exhibition room on the fifth floor, home to the ‘hanging works of art’. Hanging on the extendable panel opposite ‘Iwan’s wall’ are paintings by Francis Bacon and Mark Rothko, both of whom are undoubtedly among the greatest artists of the 21st century. ‘Quite cool, isn’t it. These are priceless pieces’, says an elated Smit, pointing to other examples in the room that inspire him. He finds it quite a special experience to see his work in such august company: ‘These are artists I truly adore’.

Crowd sourcing
As he stands in front of his painting, Smit explains its background and symbolism. He was commissioned by Boijmans Van Beuningen in 2017 to craft a work of art for Rotterdam, something similar to the commission that was granted to artist Fra Bartolomeo in around 1510 by the city of Florence. It took Fra Bartolomeo four years to make his work Pala del Gran Consiglio, but Smit only ‘bivouacked’ for something like three months in the museum to work on his painting, which was funded by crowd sourcing. This also meant that visitors to the museum were allowed to provide input for the painting. ‘As a result of that, the emblems of Feijenoord, Sparta and Excelsior all appear in the work’. Smit has portrayed other Rotterdam icons as well, including Erasmus, Boijmans Van Beuningen and the Laurens church, among other things. One particularly noticeable element is the eye at the top centre. Smit explains: ‘The text – “The waking eye pointed at us” – comes from the song Rotterdam by Frederique Spigt, and at the same time epitomises the progressive view of museum director Sjarel Ex’. The fire refers to the bombardment of the city during the war, and the phoenix rising from the ashes stands for post-war reconstruction.

'The text “The waking eye pointed at us” comes from the song Rotterdam by Frederique Spigt, and at the same time epitomises the progressive view of museum director Sjarel Ex'

Children’s bible
Smit both plays and wrestles with themes such as angst, freedom, power, religion, balance, life, heritage and mortality, not just in his works of art but also in his life as an artist. He was afflicted with anxiety disorders from an early age, but has seemingly been able to manage these increasingly better as time has passed and also features them in his work, which acts as a kind of relief valve for him. For example, he associates the lions and tigers which inhabit his paintings and light sculptures with power and freedom. To him, these animals symbolise the conquering of fear. He sees them as free spirits – unrestrained animals – while at the same time applying the nuance: ‘even though they may also live in captivity’. Religion has been another of his themes ever since he visited churches in Limburg with his parents as a child. Such was his wonder that his parents gave him a children’s bible which he still cherishes, and which sits on a shelf in his workshop, and the theme of religion remains an inescapable feature of his work. For example, in The Mystical Birth of Rotterdam the Virgin Mary is represented pouring out the Rotte river, and he has given the title Trinity, a clear reference to Christianity, to one of his own favourite works of art. Trinity is an abstract work, a light sculpture consisting of three circles which is also stored in the Depot.

'The Virgin Mary pouring out the Rotte river'

A wall painting in the museum
In addition to Trinity, his favourites among his own work include Metamorphosis and Totem (Good Omen). Metamorphosis could be admired as a wall painting in Boijmans right up to the start of the renovation work. It depicts three figures representing the different stages of the museum as it goes through a transition. Smit explains: ‘I look upon it as self-conceived mythology. The figures featured in Metamorphosis are personifications of the museum. The first struggles under the burden of the huge mass of artworks it has collected around itself in the course of time. In the second, the figure has come to a complete standstill, wrapped in the cocoon, while the third shows the figure emerging as a victor’. Totem is constructed from traditionally lucky items such as a horseshoe, a four-leaved clover, a Japanese lucky cat and a charm against the evil eye. It is a good-luck charm for turbulent times such as these and was, until recently, on display at Big Art on the Hembrug grounds and in De Spelonk in The Hague.

A natural-born artist
Inspired by chewing gum stickers, among other things, Smit was already drawing cartoon and other characters like Spiderman, Batman, Ninja Turtles and Robin Hood at an early age. Because he produced the drawings from memory, however, new characters also came into being. Smit explains: ‘I wanted to make cartoons or become a cartoon character artist when I grew up. That was the kind of job I could already picture in my mind’s eye. After all, drawing and painting were the only things I was good at, and that has never changed. For me, becoming an artist has been a natural growth process. I sold my first work of art around the age of 18 for 300 euros when I was admitted as a trainee to an exhibition in The Hague; that was my first success. In those days, my aim was to be able to at least pay the rent and buy the groceries from my work, so that I wouldn’t have to do a job on the side. To me, such jobs were an unnecessary distraction from what I really wanted to be doing. I first got to know Boijmans as an artist in my early twenties. I was asked to participate in Kunst4Kids, an event organised by the museum once every two years to introduce children under 16 to art. We, the participating artists, were each commissioned to produce a work of art in a series of between 30 and 100 pieces. I made a screen print called Still Life of My Youth, which featured images that had inspired me as a child, such as Michelangelo’s David and Leonardo Da Vinci’s Mona Lisa, as well as cartoon characters. The kids were each allowed to choose one of these works of art for themselves to take home, and quite soon all my screen prints had been taken away by the kids’.

'It all seems to be peace and calm on the surface, but there is more going on'

Favourite Rotterdam artists
Smit, who was born in the city quarter of South and raised in Hoogvliet, has been living in Rotterdam again since he was 19, and has a house in West, as well as a workshop near Leuvehaven. He loves the city and its artists: ‘My favourite Rotterdam artists? Joep van Lieshout, with my favourite work of his being Monument, a bronze sculpture representing a man riding on a horse. This sculpture is temporarily on display at the entrance of Joep’s workshop in the MH4 area. To me, this sculpture exudes menace, harmony and mobility. This is something you can also see in my work; it all seems to be peace and calm on the surface, but there is more going on’. For example, the horse in Van Lieshout’s sculpture seems to be trampling someone. Hidde van Schie and Gyz La Rivière are two other Rotterdam artists that Smit mentions: ‘The work of Gyz in particular just breathes Rotterdam’. Smit has also bought work from both these artists for his home. He considers it an honour that others refer to him as a Rotterdam Make It Happen icon because of his contribution to the exciting cultural climate of Rotterdam: ‘The thing is though, that I don’t feel like a Rotterdam artist pur sang so much as a visual artist in Rotterdam. I am currently working on a work of art for the public space in Rotterdam, and on another work in Almere’. Something to look forward to then, but first let’s pay a visit to the Depot, which will be opening its doors to the public on the 6th of November. 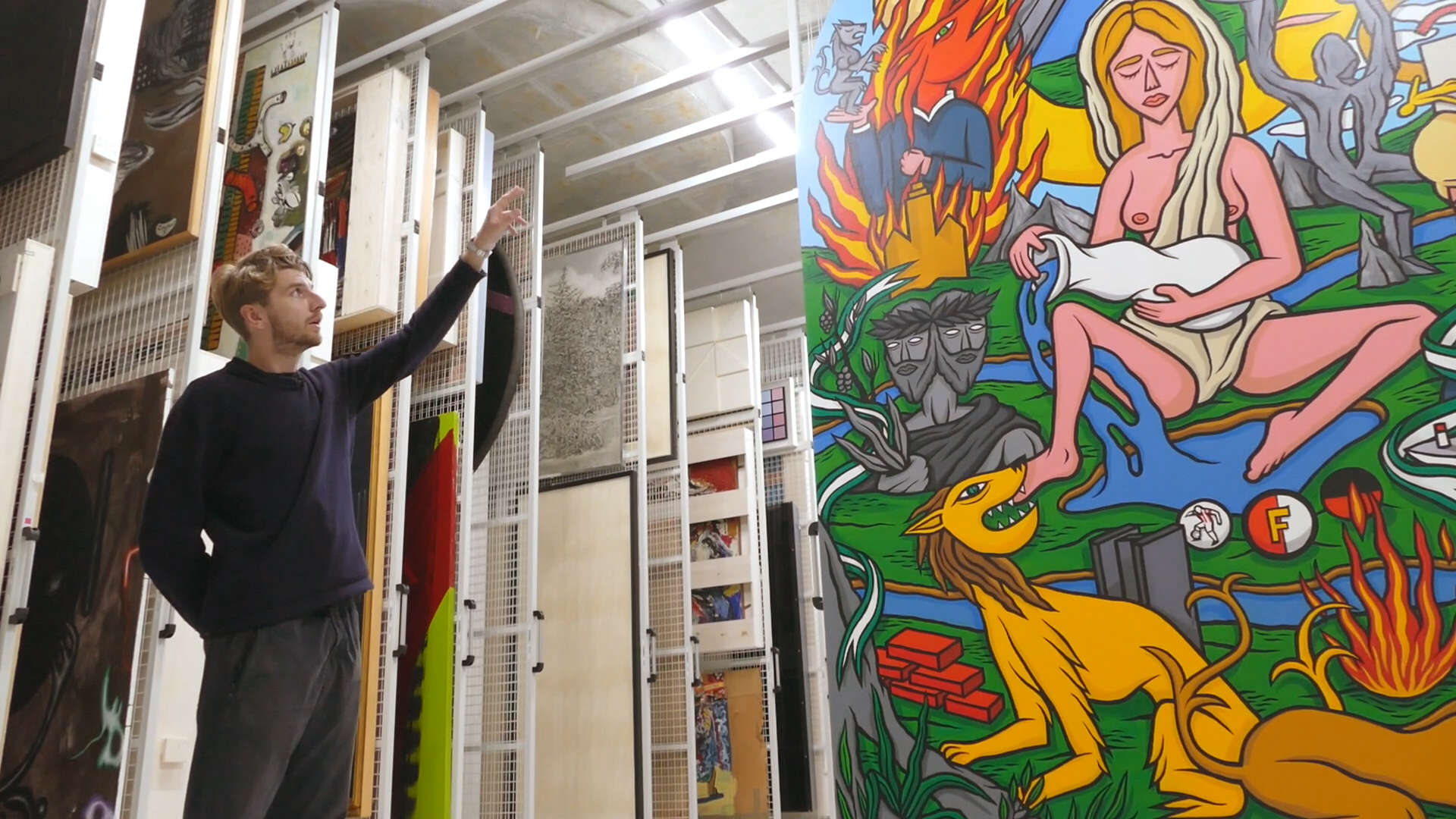 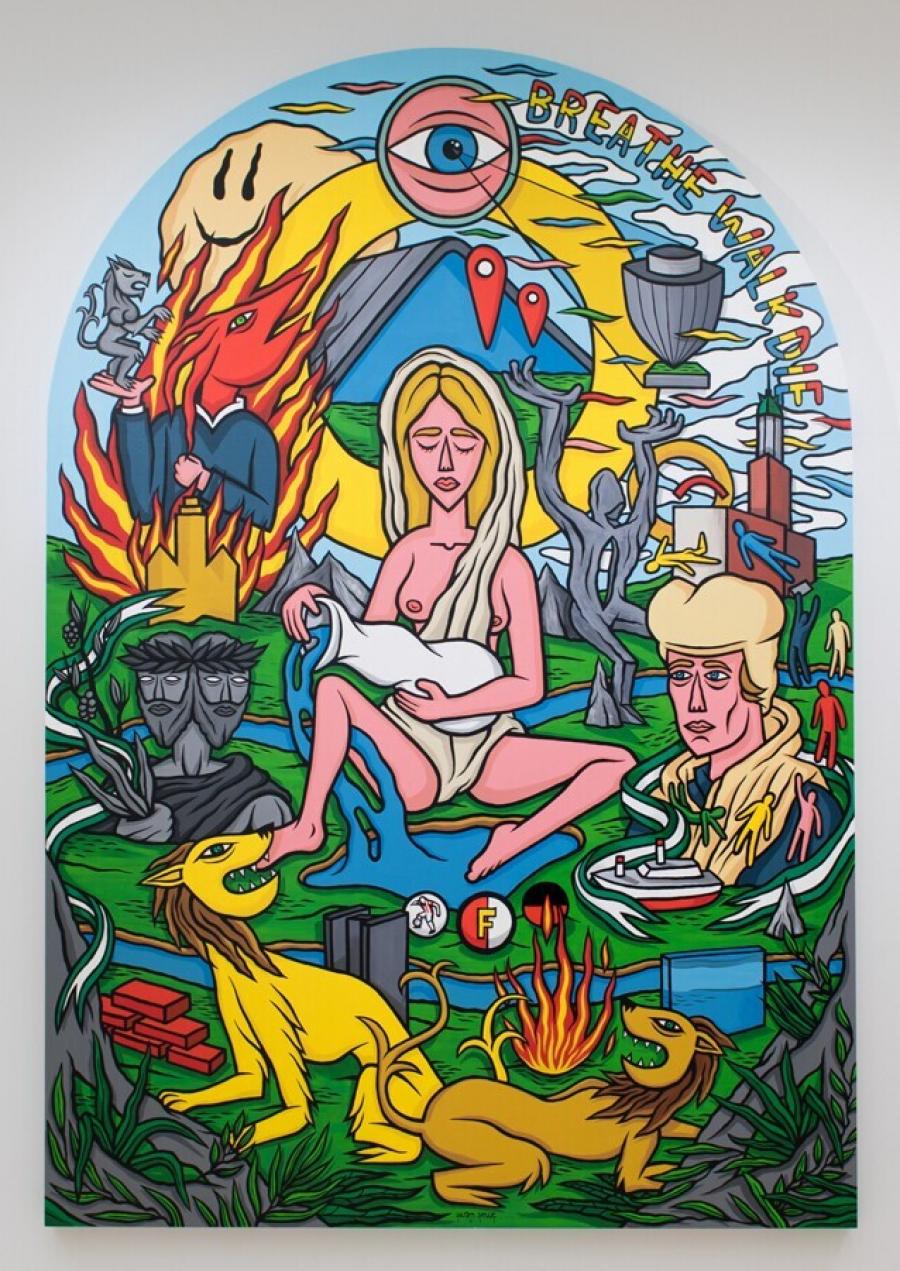 Music, films, domestic animals, nature and the close observation of other artists.

‘I am not a believer or a spiritual person but I do appreciate the highly artful structure of many symbolic and mystical works of art and narratives. I also think it’s a wonderful thing when people can take strength from them, without bothering other people’.

‘I feel privileged to be able to do this kind of work and if I can continue this in future, I will remain a very happy person. And if I am allowed to dream: I hope that my work will gain recognition on an international scale too’.

Magic the Gathering (a card game), films, music, having lunch with nice people, going out camping in my camper.

A delivery van that doubles as a camper.