After several months without a cinema, Expat Cinema Rotterdam will start again on Sunday 7 June with the film The Wild Goose Lake.

Expat Cinema Rotterdam curates and programmes international films with English subtitles at LantarenVenster. Host Katie Crook carefully selects the best from the latest international feature films. She introduces the film at each screening. Now that LantarenVenster has reopened, the Expat Cinema Rotterdam programme will restart with The Wild Goose Lake on Sunday 7 June.

After 3 successful editions, Expat Cinema Rotterdam had to temporarily stop the planned film screenings. The programme resumes on Sunday 7 June with The Wild Goose Lake. ‘The Wild Goose Lake is a film by Yi’nan Diao, a talented Chinese director who has won multiple awards. We had already planned and announced this film in March when the Corona measures were introduced,’ says Katie. Both LantarenVenster and Katie thought it was a good idea to still show the film.

LantarenVenster adheres to the protocol for cinemas drawn up by the government, which means a distance of one and a half metres. Katie: ‘For the first month, a maximum of 30 people are allowed in the cinema, from 1 July this will be increased to 100 visitors a film. Tickets must be reserved online in advance. LantarenVenster naturally ensures a safe distance. The networking drinks will not take place after the film. ‘Normally we have a meet-up where you can socialise with other expats or film fans. We can’t do this in the coming period for safety reasons,’ explains Katie. ‘It’s a great way to make new contacts because everyone loves films!’ 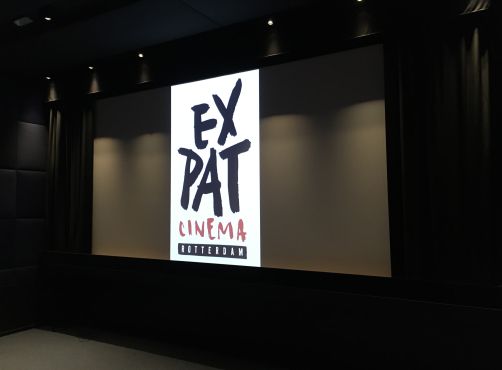 Katie (from Britain) went to LantarenVenster with the idea for Expat Cinema Rotterdam. ‘When I had just arrived in the Netherlands, I found myself watching a lot of Hollywood films because Dutch subtitles were too fast for me. I missed good international feature films because of this,’ says Katie. ‘I came across film screenings for expats in Amsterdam and I became a regular visitor. When I moved to Rotterdam last year, I wanted to organise the same thing here.’ LantarenVenster was open to the idea and we started the programme in January 2020.

We don’t know yet which films will be shown during Expat Cinema Rotterdam. Katie: ‘It’s difficult to make a good selection because Covid-19 has also turned the film world upside down. Scheduled movies aren’t coming out until later, everything has been postponed and shifted. We hope to come up with a good film for the coming edition soon!’ Expat Cinema Rotterdam takes place at LantarenVenster every first and third Sunday of the month.