The Rotterdam-based company Tambr, specialised in sonic branding, saw many musicians and composers at home because of the corona measures. ‘While it’s in times like these that they have something to offer, music connects,’ says Niels de Jong of Tambr. Together with his colleague Willemijn van Hussen he initiated the project Soundtrack010. They ask Rotterdam composers, musicians and producers to translate typical Rotterdam sounds into music. The composition is a set of fragments and loops that everyone can use. In a few weeks, this will be presented as one Soundtrack010 with an accompanying video clip. ‘It’s a gift from and for Rotterdammers.’

How did you come up with the idea for Soundtrack010?

Willemijn: ‘We’ve actually had the idea for some time, but this really felt like the right moment for it. Rotterdam’s branding is good and the city has a well-stocked image bank with photos and videos. Music is a logical addition to this. Musicians are at home and have been hit hard by the corona crisis. By offering them this assignment now, we’re supporting the cultural sector. And we’re also bringing positivity to the city through music.’

Let’s go back to the beginning. What exactly is sonic branding?

‘We make music for brands and organisations. They use the music for things like commercials or online videos,’ says Niels. ‘You start with an intensive analysis of the personality of the brand and associations that the target group has with the brand. We translate this core into musical guidelines that form the basis for a whole set of music. It’s an extension of the visual identity,’ adds Willemijn.

A soundtrack from the city as a gift to Rotterdammers. What can we do with it?

Soundtrack010 is an audio library with music, fragments and loops that everyone can use to promote the city. Like a podcast maker, for example, who uses the music as an intro or a company that adds the Rotterdam sound to a video.’ Niels adds: ‘And how nice would it be to hear this sound from the carillon of the Laurenskerk?! We don’t think there’s a city more deserving of this than Rotterdam!’

‘Everyone we’ve asked is participating. It’s great!’ says Willemijn. ‘We couldn’t have dreamed that it would be so big.’ Niels: ‘We received funding for the musicians and composers from parties such as the Droom en Daad Foundation and Eurocaps. A lot of people also offer their services voluntarily, like filmmakers or logo designers.’ 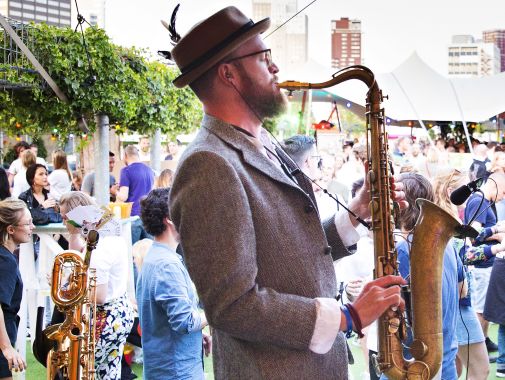 You use input from Rotterdammers. How do you work?

Niels: ‘We involve people from Rotterdam using crowdsourcing, everyone can send in their typical Rotterdam sounds. We are continuing to build on an appeal that the Havenloods made last year. Sounds like a busy Lijnbaan, a tram coming around the bend, the Witte de Withstraat waking up. Or the drilling of concrete piles you can always hear somewhere.’

How does it translate into music?

‘We converted the sounds into a briefing for the composer. We work with archetypes and have thus created a personality for Rotterdam. Alexander van Popta from Re:Freshed Orchestra is currently composing based on our input,’ Willemijn explains. ‘From here we will work with an orchestra of thirty musicians. If they have a studio at home, they’ll record there. If they don’t, we’ll facilitate an external studio where they can record separately.’

What are the next steps?

‘We’re going to record a clip with the musicians at Rotterdam venues such as Theatre Zuidplein, Bird and Rotown. Places that have come to a standstill will be filled with music again,’ says Niels. ‘We will be launching Soundtrack010 and the video in late April, early May. And we hope that we can offer the sound of the city on vinyl to Mayor Aboutaleb,’ says Willemijn.

Do you still need help?

‘Rotterdammers can continue to submit their sounds via our website. We’ll continue to use the input,’ says Willemijn. Niels: ‘And if there are still venues that want to participate in the recording of our video, we’d love to hear from them too!’

Soundtrack010 is live. Watch the video below. For more information, visit www.rotterdammakeithappen.nl