Before work could begin on the Erasmus Bridge in Rotterdam, a model had to be presented to the powers that be in The Hague, and it was that very model which facilitated the raising of the additional funding needed by the city to build the bridge. A brilliant move, and once the Swan was there, it quickly became one of the city’s most famous icons. The angled pylon epitomises post-war Rotterdam as a gutsy city with its view focused firmly on the future and the courage to think big. For more than 25 years, the Swan has literally bridged the gulf between the southern and northern city quarters. She connects the city, making it whole. Anyone thinking of Rotterdam will picture the Erasmus Bridge in their mind’s eye.

Let’s go back to the mid-eighties: Bram Peper is mayor of Rotterdam, and he is intent on giving the Meuse City a more metropolitan vibe, so when Riek Bakker is appointed as City Development director, things really start to move. Bakker’s message is clear; the city stands with its back to the river, but in fact half of that very city is on the other side of the water. Her message: build a bridge to South.

And so the bridge became a reality. Figuratively at first, in the form of social renewal and urban development, including the climate for investment in a massive new build. The Court decided to relocate to the South Bank and the Hotel New York was saved from dilapidation. Rotterdam also ensured that the infrastructure needed to make all these new facilities accessible was provided, including a metro station. But that bridge was undoubtedly the most daring of all the plans. A bridge to South, literally. A bold venture, elegantly realising the ambitions of the country’s second city.

In his 2019 interview for Gers! Magazine, Peper said: ‘This was a city bridge, so it was the city itself that needed to raise the necessary funding. We had a budget of 350 million guilders, and going over budget wasn’t common in those days. The Municipal Works department, which had also designed the Willemsbrug, devised a four-pillar bridge that was just within our budget, and then Riek introduced UNStudio’s Ben van Berkel, who designed a curved bridge. Truly superb’.

Superb and expensive; 45 million guilders too expensive to be precise.

'Yet we felt that the city deserved that bridge because of what it epitomised. So I had a model made, which we had delivered to the offices of Hanja Maij-Weggen, the then Minister of Infrastructure and Water Management. I said: “Let her get used to the idea, and then I’m sure I can talk her into funding the extra 45 million guilders.” In the jargon of the Ministry, a bridge is termed an artwork. Well, how much art do you want? And you know what – she said yes!'

If the bridge has achieved nothing else, it has given the residents of Rotterdam something to be proud of. Riek Bakker would go as far as to say that the city would never have become what it is now had it not been for that bridge. Those admittedly noisy span cables were quickly forgiven throughout the city, and if UNStudio were to attempt to claim the image rights on the bridge, they would have a fight on their hands.

You have only to look at aerial images of Rotterdam before and after the building of the Erasmus Bridge. New buildings quickly sprang up, with the Swan as a focal point; the source – as it were – from which expansion spread in all directions.

Obviously, the skyline continues to develop, and the renewal that the City Council visualised springing from that daring Meuse-crossing has been taken up by the city itself. ‘Renewal became unstoppable’, says Peper, ‘Rotterdam residents no longer looked to the City Council to get things done; they began to sort it out for themselves. And that is how Rotterdam has gradually become a city to be proud of. Not on the grounds of chauvinism or an underdog chippiness, but because the city has something to offer: to young people and newcomers, as well as the people who have lived here all their lives’.

New icons are still being added to the city, and its face changes from one year to the next: the residential towers on the South Bank, the Markthal, the Depot, the Zalmhaven tower and the Central Station. Rotterdam and its residents will never rest on their laurels; they will keep looking to the future. After all, things can always get grander and more impressive.

That particular bridge, however, will always remain a landmark. That angled silhouette on the waterfront symbolises the new Rotterdam – today's city and the city of the future. 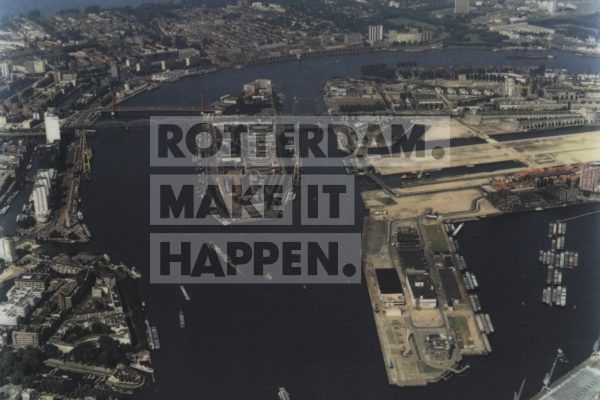 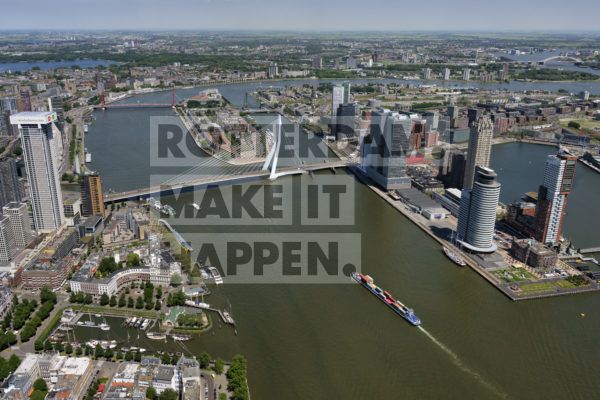