Resources on this platform are updated frequently. Check the Terms and Conditions before downloading.
Dutch English
Erasmus MC is a highly respected international institute where essential scientific research is conducted in the fields of life sciences and public health. The reputation of the hospital attracts top talents from all over the world, and Dora Hammerl from Austria is one of these. She researches innovative methods to effectively kill tumour cells. Dora was born and raised in Austria, and although she has been working in Rotterdam for only a few years, she speaks Dutch without an accent. At the age of twenty-two she relocated to the Netherlands to study for a masters in Bio-pharmaceutical Sciences in Leiden. After finishing a research period in San Diego – 'hard work, but also lots of free time for lovely surfing' – she immersed herself in research at the Internal Oncology department of the Erasmus MC in the Meuse City.

To some extent, her love of surfing played a part in her choice of Rotterdam. She chuckles: 'I was told that an artificial wave installation, RIF010, was to be created in the Steigersgracht. This had, in fact, been planned for 2016, but was unfortunately delayed due to protests. Then again, it’s obvious that my choice of Rotterdam was also based on the facilities and network at Erasmus MC, plus the fact that the position fitted seamlessly with my ambitions'.

Dora has the opportunity to make her dreams come true at Erasmus MC because the Rotterdam-based institute is working hard on innovative methods for the treatment of cancer. Conventional chemotherapy has been found to be ineffective, or nearly ineffective, for a significant group of patients, and the therapy also has many negative side effects. Immunotherapy is a new and potentially effective way of killing tumour cells. Housed within Erasmus MC is an advanced Tumour Immunology laboratory, the only such specialised facility in the region. Dora explains: 'In the lab we focus on immunotherapy for cancer. The human body already has an ingenious defence mechanism to protect it from the dangers of bacteria and viruses as well as cancer cells'.

'T cells, a specific type of white blood cell or leucocyte, form an important element of that defence mechanism. T cells are essential in the prevention of early cancer; they recognise aberrant cells and eliminate them. But that process may fail, leading to the development of cancer. The deployment of immunotherapy is an attempt to bypass that failure and eliminate those tumour cells'.This is how it works: T cells recognise aberrant molecules (antigens) on the outside of tumour cells using their T cell receptor, but this effective T cell response does not always occur in cancer patients: 'By using immunotherapy, we are trying to increase both the number and activity of the T cells in the tumour so that they start to fight the tumour cells effectively'. [caption id="attachment_23210" align="aligncenter" width="800"] 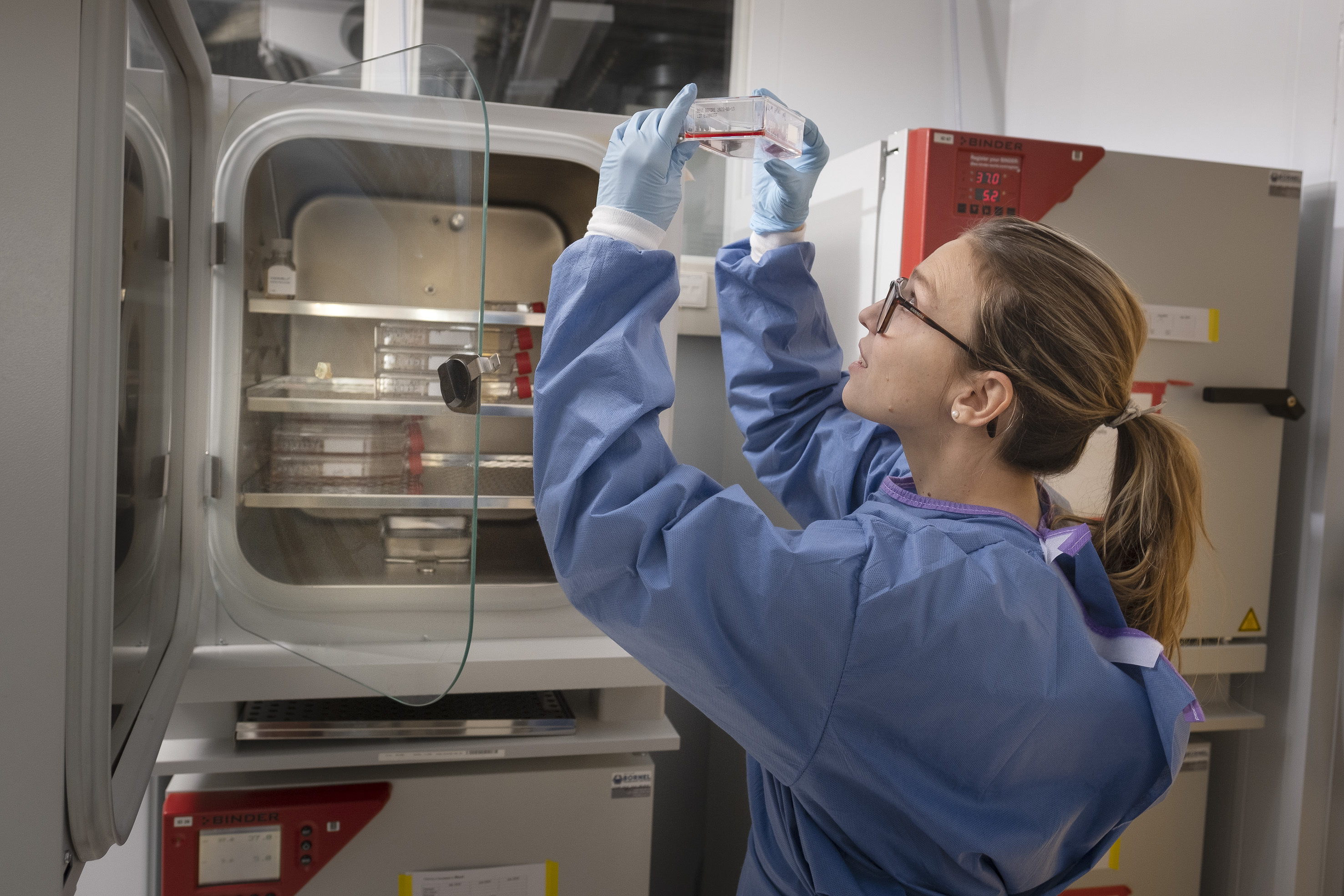 Dora at the Tumour Immunology laboratory.[/caption]

The way in which and the degree to which the tumour cells defend themselves become visible under a microscope. It then becomes clear which immunotherapy will be most effective. How the patient's defence mechanism reacts to the tumour cells is also studied in order to further enhance the effectiveness of the therapy.'We also check the tumour tissue samples for the presence of the patient’s T cells. Are there many cells or only a few? Are they located mainly on the outside of the tumour tissue or also within it? In the laboratory we can also study the function of T cells. Assessing all these differences makes it possible to subdivide the tumours into different categories'.

Dora, however, also has other talents: as preparation for her thesis, which she hopes to finalise within a year or two, she wrote an article for a scientific magazine outlining the state of technology within her discipline. It was recently published in Trends in Immunology, a leading magazine, for which Hammerl was also asked to design the cover. She says: 'It is not unusual for authors of an article to be asked to provide an illustration for the cover. The editor-in-chief didn’t give me much time, but I set to work on my obsolete iPad without any advanced software'. In spite of these limitations, she managed to create an illustration that the editors of Trends in Immunology considered to be cover-worthy. With a smile: 'The framed picture enjoys pride of place in the lab'. [caption id="attachment_23208" align="aligncenter" width="800"] 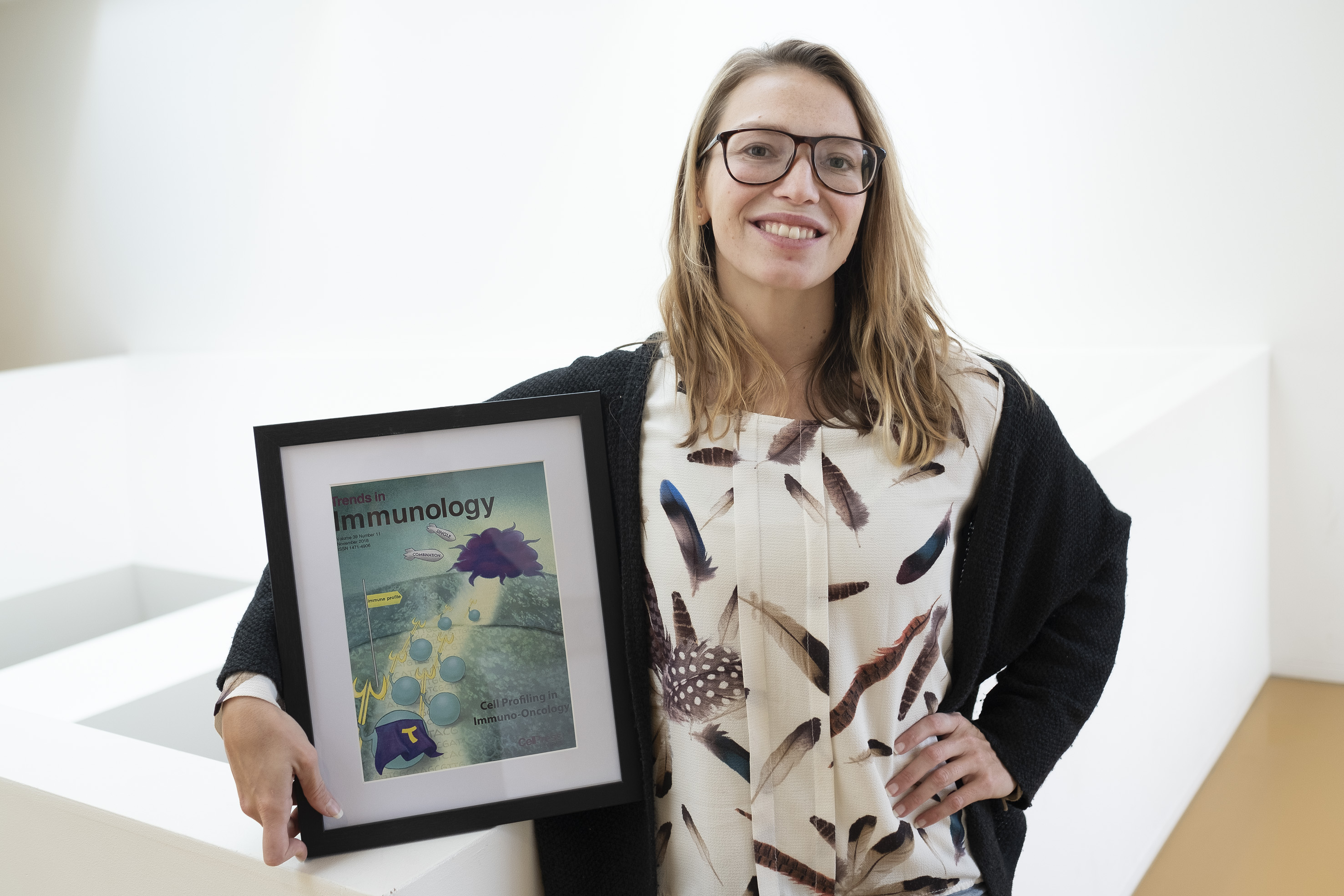 Dora with the cover she designed especially for 'Trends in Immunology'.[/caption] Read more about the research being conducted at Erasmus MC in the online magazine 'Amazing'. 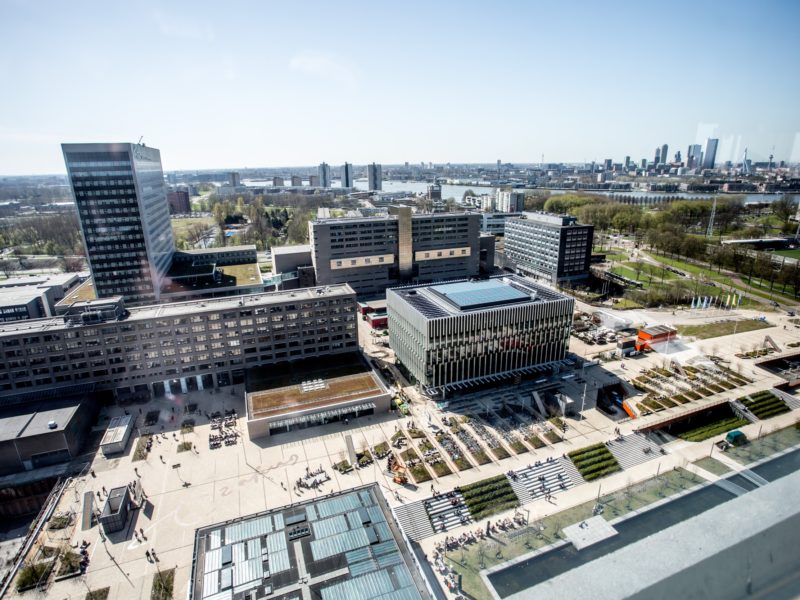 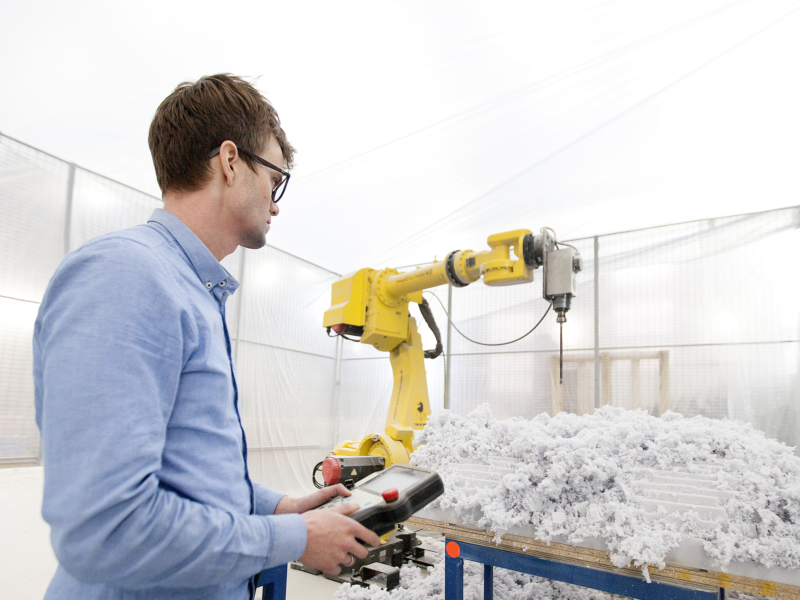 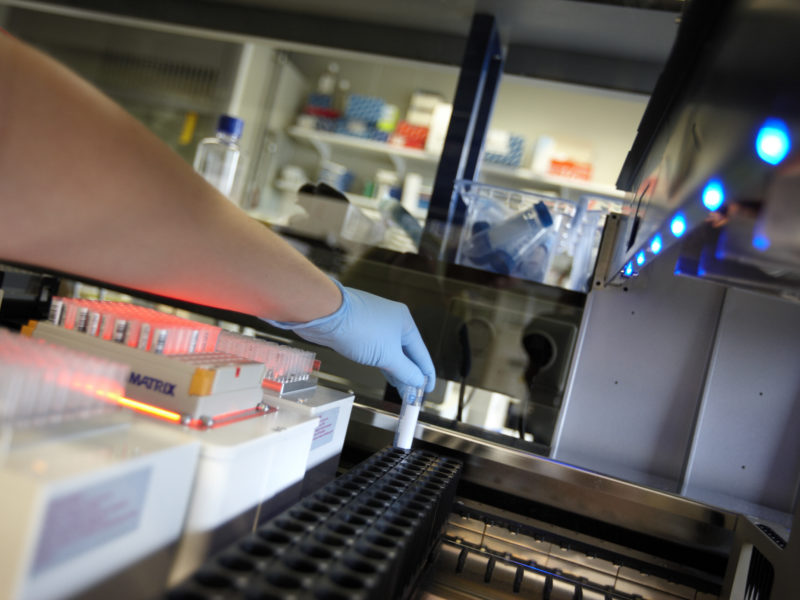 A healthy future for Rotterdam residents