‘A playground where circular entrepreneurs with brains, balls, guts and fun are driving towards a future where there is no waste.’ This is how BlueCity describes itself on their website. BlueCity has been around for approximately 4 years. Four years in which the initators have experienced many highs and lows. One thing is clear. The BlueCity people have balls. As well as brains, vision, guts and fun… BlueCity started with a group of entrepreneurs which in its turn arose from an initiative by RotterZwam. In 2015 they made an appeal to other entrepreneurs to create an ecosystem together and to start work on a business case for the former tropical swimming paradise Tropicana, at the Maasboulevard in Rotterdam. October of that year saw a major development: the entrepreneurs officially acquired the building and BlueCity became reality.

A lot of help

Sabine Biesheuvel, one of the co-founders and now director at BlueCity counters recounts: “From the start we had to cope with many uncertainties and risks. That is true for us, the interested investors and for the municipality who, from day has proved to be really helpful and positive in turning BlueCity into reality.” Finding the much needed starting capital also proved a challenge. “We were very lucky that we found an impact investor who values social impact as much as return in euros. They have really helped in getting BlueCity off the ground.” [caption id="attachment_22728" align="aligncenter" width="800"] 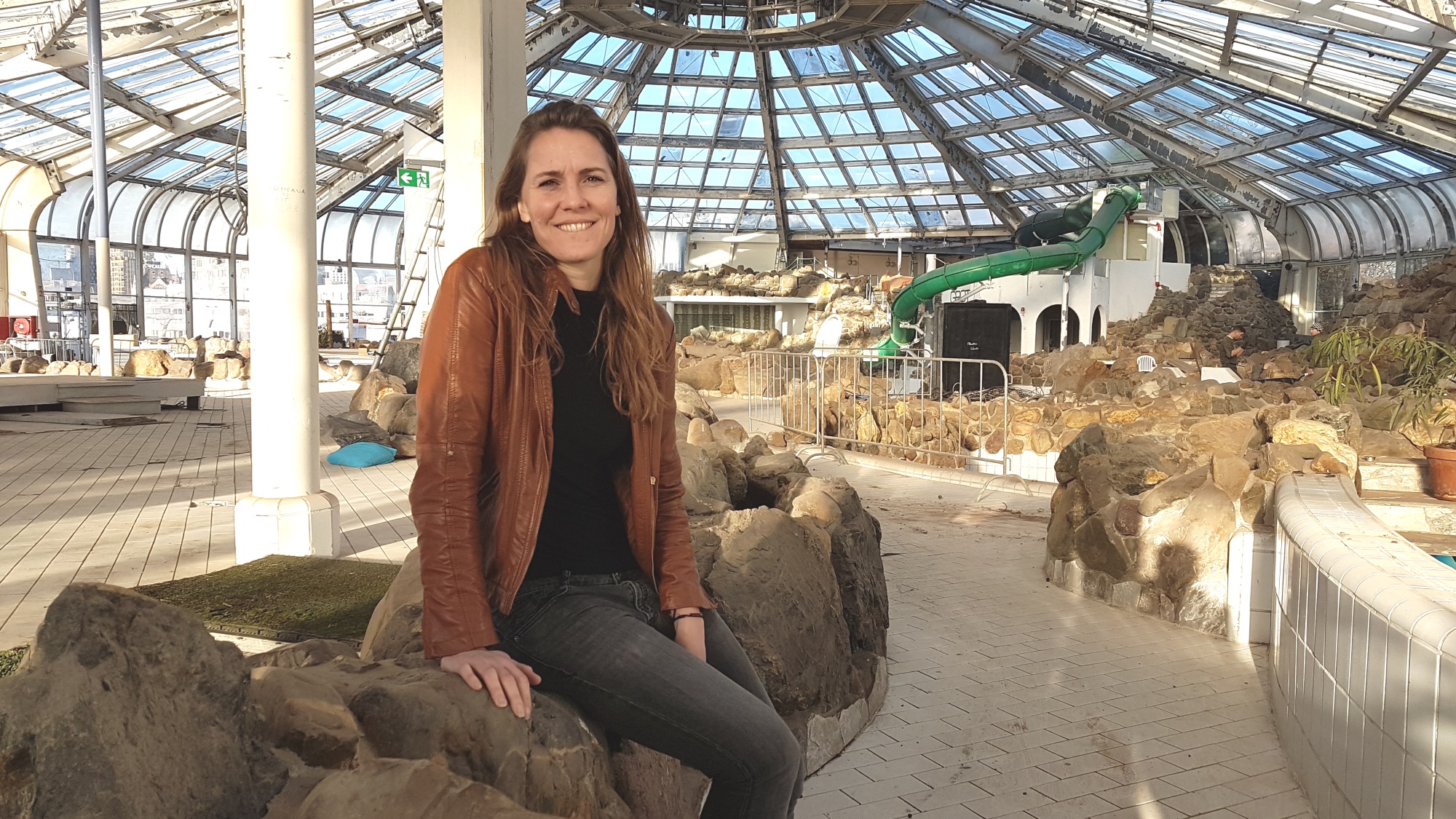 The entrepreneurs in BlueCity are aspiring to a waste free chain of production and consumption. Residuals that originate in one production process, form base materials for the next. Hard to form a picture? It’s really not that complex. Concrete examples are easily found in BlueCity. RotterZweam grows mushrooms using coffee grinds from the Aloha Bar. CO2 that is formed during this process can be used by Spireaux for creating spirulina, which is a base ingredient for veggie food products. The beer wort1 of brewer Vet&Lazy is ued to cultivate bioplastics2. And the mushrooms of RotterZwam? These have been tested in a special ale by Vet&Lazy. We could go on and mention many more examples… The people at BlueCity are well aware that these things take time and that they are a frontrunner in what might be a long process. “We are sort of a bizarre stimulus, needed for creating awareness and for showing that change is possible and needed. And we have a business case. We don’t judge the old system. Together with our business partners and from our conviction and drive we are working to create a new, better one. The Rotterdam way: through  entrepreneurship and just going ahead and doing things!”

Sabine believes that the success of BlueCity is for a large part also the success of the Rotterdam entrepreneurial climate. “It’s so easy for young entrepreneurs to get started in Rotterdam. This city offers easy access to various relevant networks, such as R’damse Nieuwe, a network of young innovators and entrepreneurs in Rotterdam. And it’s really easy to get help from fellow entrepreneurs, Rotterdam has an atmosphere of togetherness, of helping one another. It’s also a good thing that the municipality really values innovations and cooperates.”

“It’s really easy to get help from other entrepreneurs in Rotterdam.”

A circular city within the city. That’s a good way of describing BlueCity. So how far do their ambitions go? “We want to accomplish a lot. Currently we are busy developing a conference facility, and a laboratory for bio based product development next to our current workshop, a pop-up space for new initiatives. And we are developing circular ‘short stay’ houses… Our ambitions extend beyond the borders of these premises. We are working on the business case for a location for disassembly of large scale buildings in Rotterdam. for repurposing materials. There’s also a lot to gain with respect to the circular and sustainable design of new buildings. More often than not, no thought is put into for instance VFG-waste of the people who will be living or working there, which could of course be reused.” [caption id="attachment_22730" align="aligncenter" width="800"] 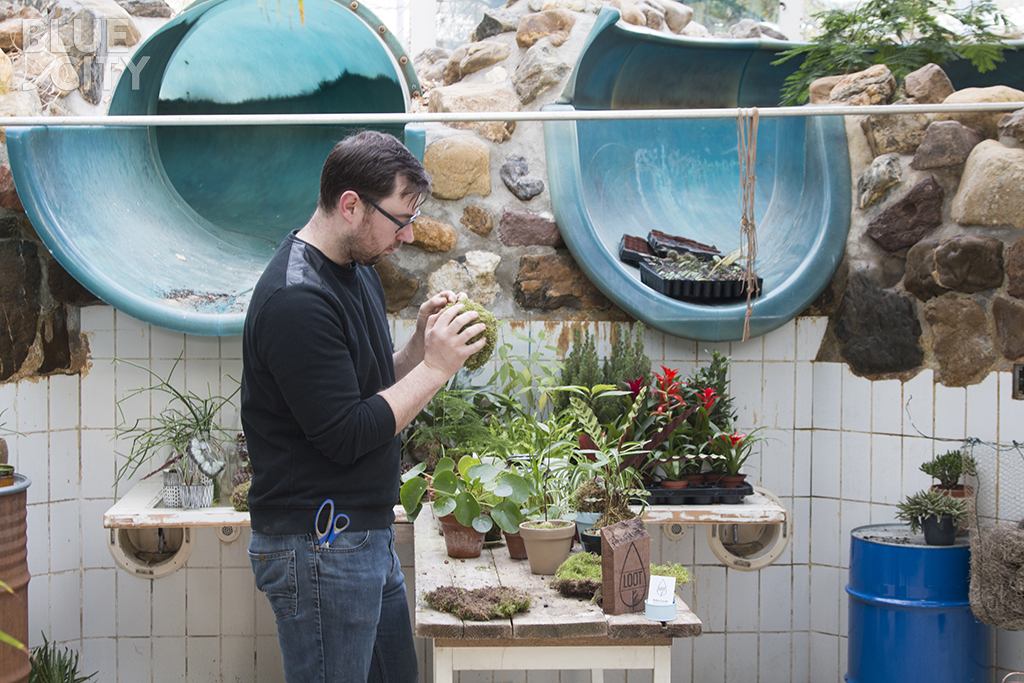 A entrepreneur working at BlueCity.[/caption]

BlueCity is more than just an exemplary circularity hotspot. Its inhabitants really want to contribute to an increase in awareness and a behavioural and mentality change. “It’s important that people become more conscious of their behaviour and that the dynamics between people and products change. We mustn’t just take, we have to become a part of the whole chain of production and consumption and understand what this means to our ecosystems. I feel that for this, Rotterdam is the right place to be. It’s the city that’s at the start of energy transition and climate adaptation, a city that recognizes opportunities. People here are open to new ideas and voices and appreciate the power of collaboration. That’s a really important starting point, one which will certainly help us along the line.” [caption id="attachment_22731" align="aligncenter" width="800"] 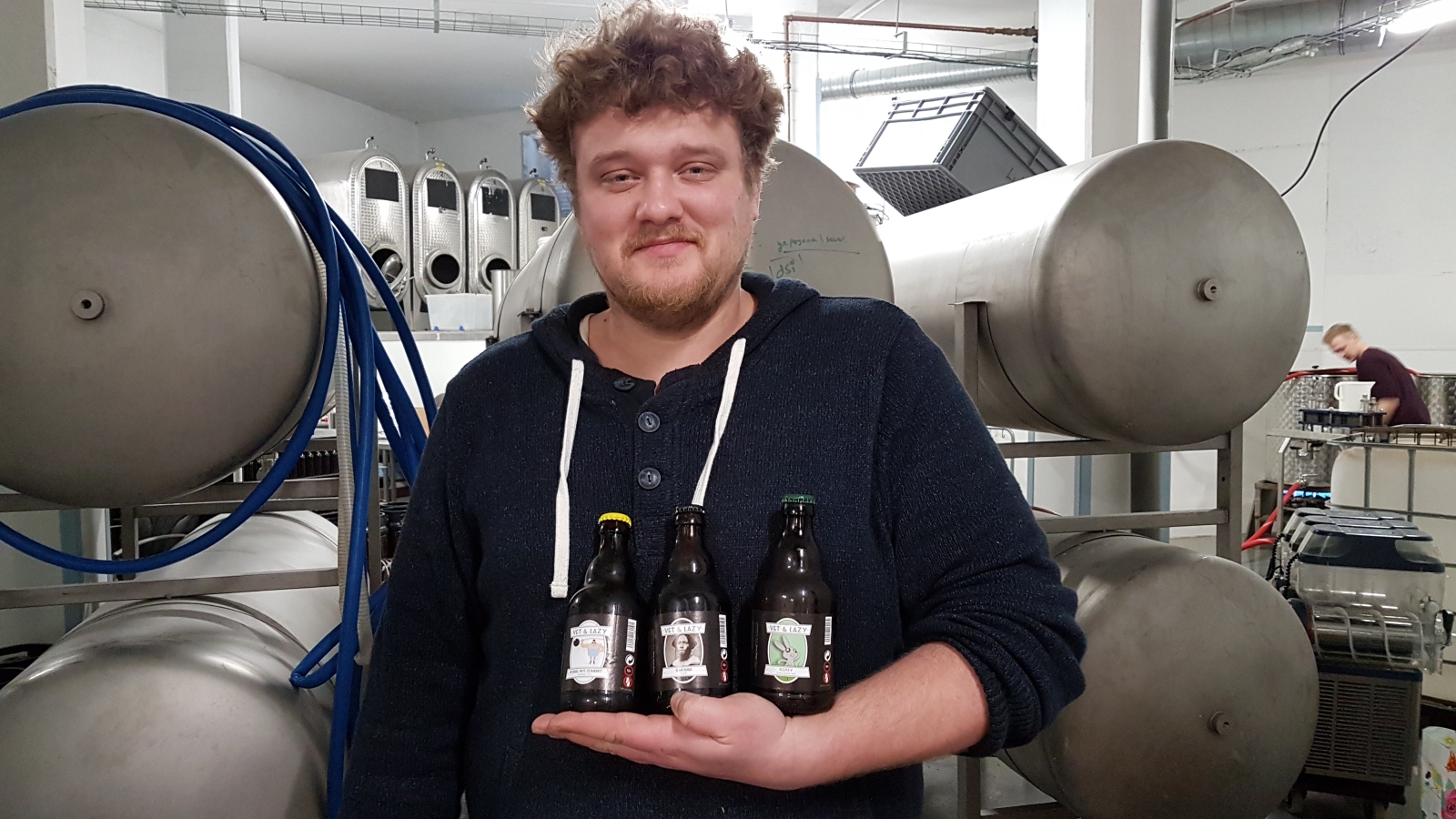 Ruben Krommenhoek with three of his beers, including ‘Your Mother’.[/caption] One of the entrepreneurs based at BlueCity is local beer brewer Vet&Lazy (vet is the Dutch word for fat, ed.). The company originated as a home based ‘hobby brewer’ with the only aim of just making cool and great flavours. It has since grown into a professional brewer which you can find in the basement of BlueCity. Vet&Lazy produced some 3,000-4,000 liters per month, partly in its BlueCity brewery, partly at an external location. Soon you will be able to buy some of Vet&Lazy’s beers at the AH stores in Rotterdam. Ruben Krommenhoek, the founder of Vet&Lazy feels righ t at home at BlueCity. “In the beginning it was quite tricky to be part of the whole circular process. You can’t put just anything  into beer. But now it’s a challenge for me to see how I can create new types and flavours using the residual materials that I take from BlueCity. For example, we have already used mushrooms, coffee, ginger and mango. And I also contribute to the circular chain: our beer wort is used by others for growing bioplastics, and for making cookies and muesli type products. We’re trying to not let anything go to waste. That’s a good thing, right?” Ruben has the typical Rotterdam sense of humour, which is evidenced by his beers. Le Phallus (name speaks for itself), Dubbel Wit Zomerfit (pun and rhyme about beer relating to being fit), Je Moeder (Your Mother)… “Customers apparently like to say, when a barman asks them what they want to have: “I’ll have Your Mother!”   1  Beer wort is a byproduct of the beer making process. It is a residual that may be found in the tubes and the kettle. 2  Bioplastic: pastics made from renewable biomass; organic materials like vegetable fats and oils, corn starch, straw, woodchips, food waste, etc. (source: WikipediA) This is a shortened version of an article that you can read in its entirety on the website of Rotterdam Partners. Photos: BlueCity and Rotterdam Partners.
Delen:
Deel dit artikel: 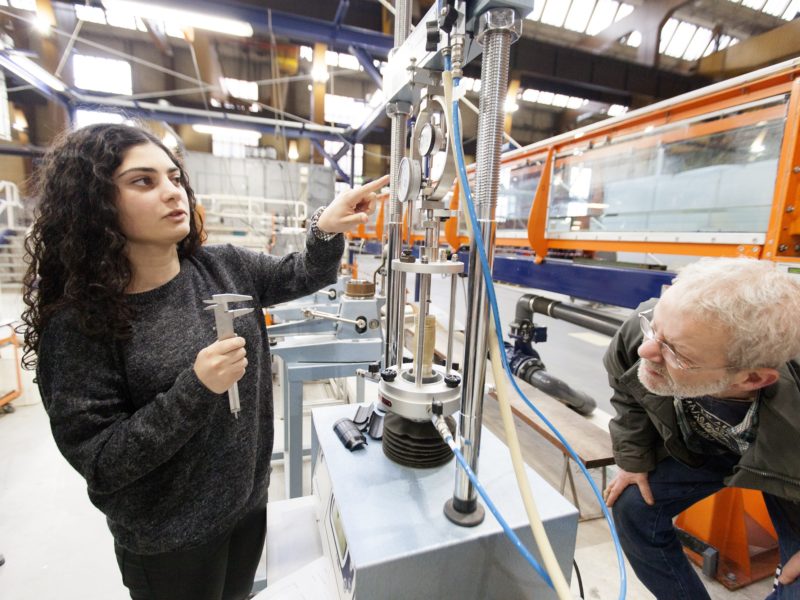 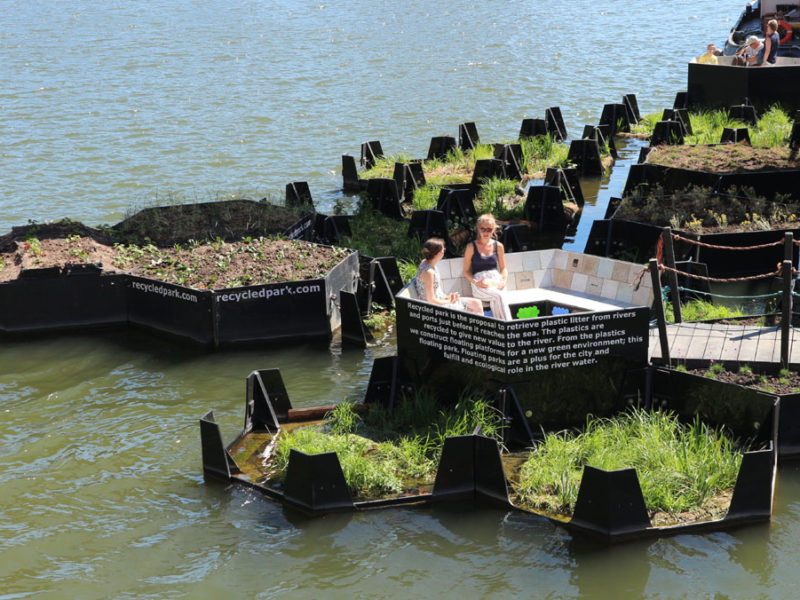 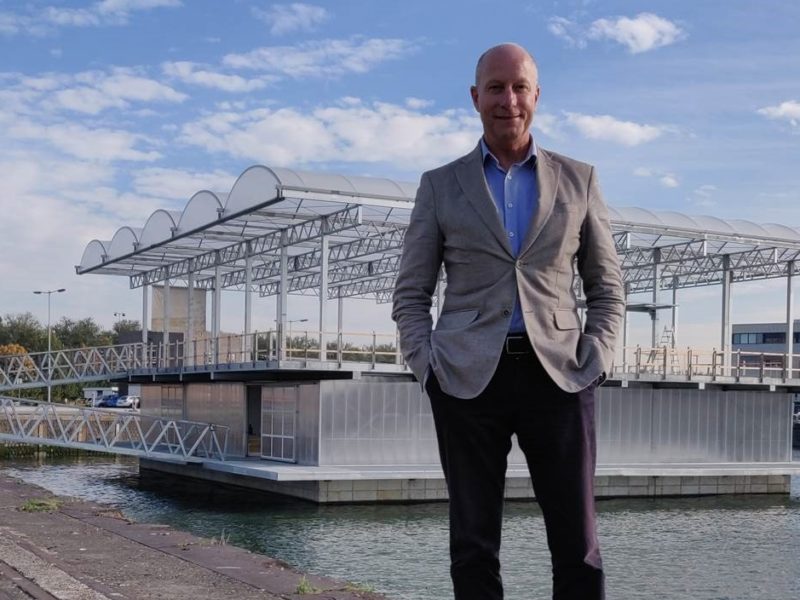 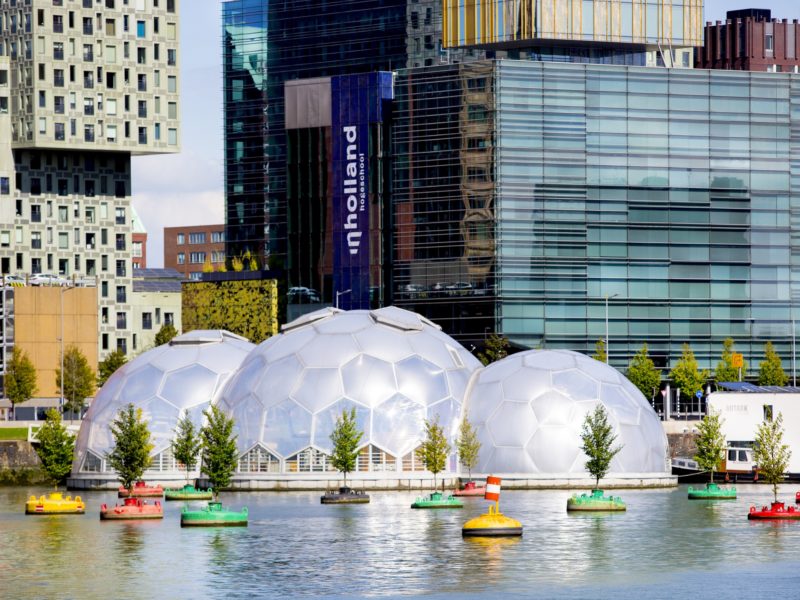